Two monitors better than one? 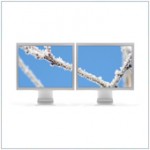 I thought this would be a really easy article to write. About a year ago I moved up from using a laptop to having a docking station with two monitors attached, and found the extra space on the screen to be very helpful. I realized that even though I have a great outdoor area to work from, I found myself almost never choosing that over the docking station in the office even after the newness had worn off. So I figured I would be able to just do some quick research that matched my instinctive findings and move on to the results.

And sure enough, I found several great articles already written proving how wonderful having a second monitor actually was. The first talked about increasing productivity for intense users like programmers and designers, which is somewhat helpful, but not geared toward the average office users. The next one spouted great improvements for almost anybody who uses computers (fewer errors, faster performance, more comfort). Great, let me grab the info on who to credit…NEC, one of the largest monitor manufacturers in the world. (Now why would they want people to buy more monitors? It may be a legitimate report, but I have too many doubts to call it legitimate). Finally I found one from Microsoft that had great quotes, but had no details on how the results were achieved. Well, I thought, that’s not going to get me very far either. I was able to find a few other reports that supported the positive gains from adding a second monitor, but nobody who really stood out as recognizable.

So, it’s up to my own personal experience to prove my point. As a random point in time, I look at what I have open right now on my desktop (1 web browser with 4 tabs open for researching this blog, a second word document with my outline, 1 IM window for keeping in touch with my coworkers, email, one app for managing my phone, and one for monitoring my network). 6 separate windows while focusing on 1 major task. When I am not at my docking station I do find that it takes a long time to organize the windows where I can see them, and I never can quite get them all arranged just right. The other thing I notice is that when I am not at my desk with the dual monitors, I find myself having to hide windows behind each other to get them to fit. Not being able to see everything forces switching between windows which wears me out much faster.

OK, so where is the down side? Many computers these days come built-in with the ability to handle 2 monitors. So, the only cost involved would be the purchase of the monitor which run less than $200 for decent models. Even if your computer can’t handle two monitors, an extra graphics card can be obtained also for less than $200. So for less than $400 and a little effort installing the equipment, the second monitor can be up and running.

So, where does that leave us? Although the reports come from many sources, some less trustworthy than others, they all agree that there is some productivity increase from adding a second monitor. When you spread the cost of the extra monitor over the life of the computer, how much of a gain does there need to be to pay for itself? My own experience backs that up, with the ability to track several different projects at once, and keep up with all of them. Finally, there is one fact that seemed to make sense to me that answers the questions better than any other: once somebody has gotten access to a second monitor, what reaction do they have when somebody tried to take it away?