GPT vs MBR When Setting up a New Windows Server 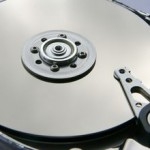 GPT or MBR? BIOS or UEFI? What do I pick when setting up my server? This has probably come up quite a bit, especially for those of us in the consulting field installing Small Business Server 2008 or 2011.

With large capacity drives (> 1TB) being the norm in server deployments these days, the decision to go with GPT or MBR partitioning comes into play. And with this decision, you must also decide on setting up your server with UEFI or traditional BIOS. Be aware that this decision should be made early in your server deployment planning stage. Your RAID array configuration, volume layouts, and backup strategies will all play a large part in your planning.

Without going into too much detail, the maximum volume size that MBR can handle is 2TB. In theory a GPT partition can handle partitions of up to 18 exabytes in size. GPT and MBR partitions cannot reside on the same physical disk or logical array. Another detail to keep in mind with MBR partitioned disks is that while you can create partitions on disks larger than 2TB by creating multiple partitions, a physical disk with a boot partition will never be able to access more than 2TB of total space. This may sound confusing, but a good example would be a 3TB RAID5 array with a 300GB, bootable C: drive. In theory one would have approximately 2.5 TB of usable unallocated space, however, due to MBR limitations on a bootable drive, you would only be able to format 1.7TB, the rest of the space would always remain unallocated and unusable without reconfiguring the disk partitioning scheme. The image below describes the situation. 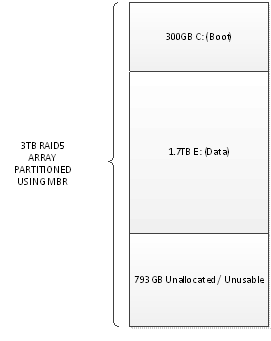 A solution to the above scenario would have been to set up the server as a UEFI based system (if supported), and to have formatted the above partitions using GPT. This would have allowed for splitting up the drive as desired, such as the 300GB bootable partition, and a 2.5 TB large data partition. Another solution would be to have installed the operating system on a RAID1 array comprised of a smaller MBR partition, and kept the data on an isolated RAID5 array for data storage purposes.

Booting from a GPT disk is only supported on a UEFI system with 64 bit versions of the above mentioned operating system (except Windows XP x64, which only supports GPT for data partitions).

Earlier in this article I had written about planning around your backups as well. GPT partition support from popular image based backup products such as Symantec System Recovery and Acronis Backup and Restore are questionable at best. An article from Symantec regarding their System Recovery line of products states: "GPT Boot (uEFI enabled) is supported in BESR but only for non-bootable partition backup and restore only" it does not clarify whether the newer SSR version will work correctly or not. Infostream will be doing further testing at some point in a lab environment to confirm. Acronis's support page is rather vague as well, so at this time I cannot confirm whether it works or not; possible future testing will confirm this as well.

As always, if you have any questions, please feel free to contact us here at InfoStream, we'll be glad to answer any questions.