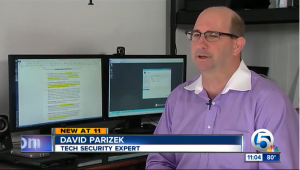 Imagine the surprise of iPhone users when they discovered that their phones were spontaneously shutting down. It all has to do with a specific set of characters, sent to the iPhone in the form of a text. When it comes into your iPhone inbox, it causes problems.

The phone can't handle what it's being told to do so it gets confused and says if it has no other option, I'm going to shut down, says David Parizek, a tech security expert with Infostream.

David reassured viewers of the good news: that the bug is relatively harmless. It's not going to damage your phone, it's not going to steal any of your information, it doesn't give access to your data. However tech experts say that in the long term, this could turn out to have been a test run for potential hackers. "They'll build off this until they can come up with another direction to try and break in," David said. "They're spending all of their time trying to break in and we're spending our time keeping them out."

What do iPhone users think? That really depends on who was asked. Some just laughed and found it a highly amusing prank, but others were concerned by the wider implications.

Apple have since brought out a fix.