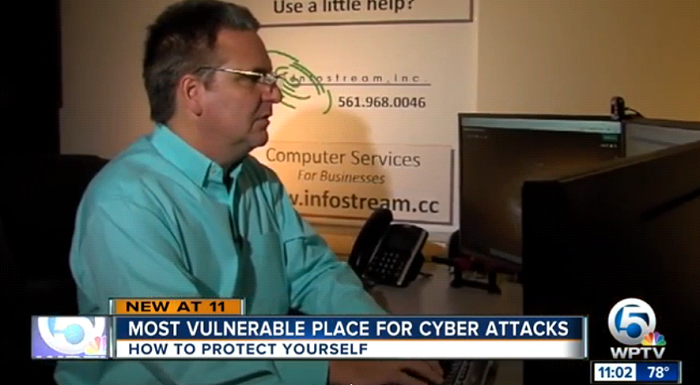 West Palm Beach has been flagged as one of the most vulnerable areas to cyber-attack in the USA, according to a new study.

Coronet, an internet security company, based in Tel Aviv, conducted the study and the area referred to is from Boca Raton to Okeechobee County.

Alan Crowetz, Channel 5’s internet security expert said that it’s not surprising that Florida in general, and particularly South Florida are mentioned, and is yet another reminder that we really need to pay more attention.

“The area’s population is retiring, elderly who haven’t benefited from using the internet all their lives.

There is a lot of money in the area and those people who are up to no good, can sniff out money. Added to that the population is transient” said Alan Crowetz.

By far the most important thing you should protect are your passwords, he says.

Use a different and unique password for every login you have. To show us why Crowetz typed his email address into the website HaveIBeenPwned.com

A different and unique password should be used for every login you have. By way of demonstration, he typed in his own email address into the website HaveIBeenPwned.com

This website tells if your email has been part of a data breach, and as it turned out, he has been a part of five breaches, including LinkedIn.

“So, who cares if they have my LinkedIn password? But if it’s the same password I use for my company email, which can then be used to get into a lot of things,” he said.

“Do I care if they have my LinkedIn password? How about if it’s the same password I use for my company email as well, which can then be used to get into a lot of things,” he said.

There’s another warning out this week from the FBI asking for everyone with an internet router this week to restart it, you should unplug it and plug it back in 10 seconds later to protect yourself against Russian malware.
For help in password protection, click here.