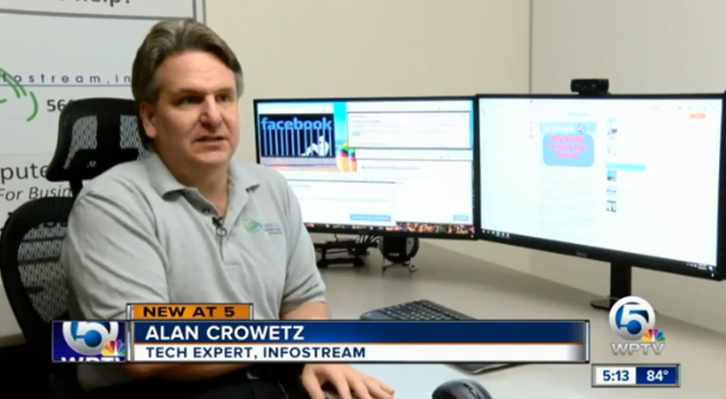 Jason and Charlene Mariner from Jupiter, who run their own business, are more than a little annoyed with Social Media giant Facebook.

They tell how they worked hard over the last two years, building up their business, relying on Social Media sites like Facebook to market their business.
However, last weekend, their Facebook page disappeared without warning. It seems they might not be alone either.

They told WPTV Ch5 News how they built their business from their garage, overcoming struggles and challenges. They, together with their team, have sunk two years’ hard work into AdSkinz.
The business pays local drivers to display adverts on the car’s rear window. It is a highly effective way for businesses to get their word around.

They already have over 3000 drivers on the road and rely heavily on Facebook marketing and ads to continue to grow.

Jason proudly says that they have maintained a 5-star rating the entire time, on the platform. The have about a hundred positive reviews plus Better Business Bureau accreditation, they have been spending a lot of money of Facebook advertising to find still more drivers and clients.

He reckons they have spent somewhere between $40,000 and $60,000 on it, so one can just imagine that they were less than happy on Sunday, when they woke to an unusual message from Facebook, telling them their page had been unpublished. It had gone. It was no longer visible to the public and the family can’t do anything about it.

The message was very vague. The Mariners were told that they weren’t in compliance with ‘community standards ‘. The way Facebook operate is that whether right or wrong, once you have been reported, they shut you down. The Mariners believe it might be a competitor or a spam button on an ad which was clicked.

Jason said that he considers it a problem that Facebook can just close their page down for whatever reason. He said he has designed his company to work with social media websites. We have appealed the case with Facebook but are unable to get any answers.

This impacts not just on my family, but on thousands of other families as well as drivers, said Charlene. At least they could answer their phone or get back to us.
This is a perfect example of a growing problem said Alan Crowetz, WPTV tech expert from InfoStream. A problem referred to as ‘Facebook jail’ mostly used to come down on offensive comments and material or copyrighted content.

Unfortunately, many of the pages are being shut down for no good reason. It’s usually an automated process or someone makes an unfounded complaint.
Alan explained that over the years, Facebook has grown into a huge company, and now they are tightening the filters on the site, in most cases through automation involving computer algorithms which are set to look for specific criteria.

Alan went on to explain that the number of Facebook users has outgrown the population of many countries, and it’s now virtually impossible to have people clicking through every post, page and complaint; how can you tighten up when the Facebook population is in the jillions? He asked. “They simply don’t have the staff/manpower, to do it and I strongly suspect that the majority of these are automated computer systems. However, they also have a responsibility: they have become huge platforms."

On their help center page, Facebook states that a page can be unpublished for following reasons:

The Mariner family say they are unaware that their business page violates any of these terms.

Facebook has come under fire, most recently in Senate hearings, after announcing that it is launching a new form of cryptocurrency. The social media giant has been in the spotlight for several controversies over the years, regarding privacy and cracking down on hate speech, yet despite the scandals, Facebook user engagement, continues to grow.

Despite spending time sorting through their issue with Facebook, the Mariners still plan to continue daily business tasks as well as raising money for local charity, including local trash cleanups and helping a little boy’s struggle with leukemia.

In the meantime, they also want to warn other small businesses: “This can happen to you. Beware. Be sure you have a contingency plan in place” Jason said. He added a message for Facebook “Go easy on local businesses. It’s hard enough to start a business in your garage and grow it into a company. Give us a break. We’ve done nothing wrong. We want to be in compliance with your platform and do what’s right and we just want to make a living”.