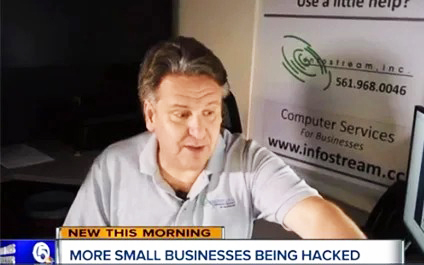 Everyone is vulnerable but how safe is your business? Security experts say that owners of small businesses are now even more at risk than ever before.

To the bad guys, small businesses are a very juicy target. In fact, they are now the hackers and bad guys’ number one target to be relieved of money according to Alan Crowetz WPTV Ch5’s internet and Security Expert.

According to Alan, there has been a huge increase in the number of successful attacks against small businesses, in the last couple of months.

He was talking about the kind of attack where the hacker actually empties a bank account, where they get your money and before you are even away something has happened, they are long gone.

“I have to look at my practice and am constantly thinking where I can tighten controls so as not to fall victim to these hackers, as can any other large corporation” says Christine.

There are, however, things you can do to protect your small business and securing your email system is at the top of that list.

Alan says that one of the hot things he is seeing, is break-ins to email and one of the easiest ways to protect against that is two factor protection. Having merely one password is no longer enough. You need not just a password but a code as well, in order for all your employees to get their email.

Another good move is to design fake systems.

Alan says “we can design fake systems, where if someone touches them, such as a hacker, the door will slam shut on them.

It is also important to tighten up on financial procedures and how money is moved.

You need to have checks and balances of how to validate every transaction says Alan. You also need to be absolutely sure to back up your systems offline.

Just taking your backups to the cloud or even home, can made a dramatic difference he added.

Advise which is taken to heart by Christine Irizarry-Amoruso who says she has learned from other people’s mistakes.