Can Home Security Cameras Be Hacked? 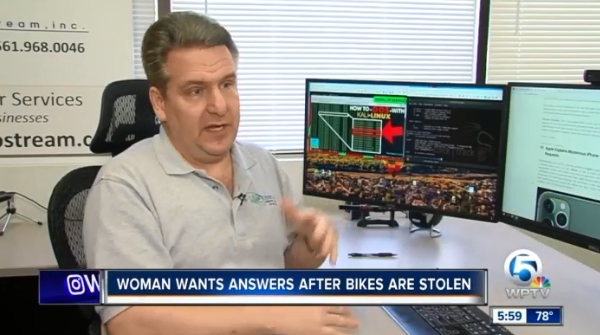 At this time of year, with packages being delivered, many people are reliant on their security cameras to protect their homes. However, the thieves may be one step ahead of the technology.

Lake Worth resident Kristen Carr has been watching surveillance footage of her Lake Worth home, over and over, after she claims her bicycle was stolen from her front yard.

“When I looked at my security footage, it was in my yard at 7 p.m. Tuesday evening and was gone at 8 p.m.,” Carr said.

Upon close inspection, the time doesn’t stop. One minute the bike is there and appears to be gone the next, exactly at the point where a car stops in front of Carr’s neighbor’s house.

“The car’s headlights are on and my bike is there then there’s a flicker and both disappear like a 1950s B horror movie, just completely gone,” Carr said.

She is worried thieves may have used a device to hack or jam her WiFi, or that they possibly found a way to pause her camera system.

“The video recording was not quite in real time, it was five minutes behind so it’s like it my security system was paused, allowing the thief/thieves to come in take my bike, then restarted the recording once they were outside again.”

Alan Crowetz, who is an IT expert with Infostream, Inc says there are multiple ways to jam a WiFi signal in order to disable a camera system, but he’s never seen it used.

“Technology keeps taking a step up but the bad guys can always be relied upon to keep finding new ways to take advantage of things. This could well turn out to be the beginning of something where we are going to see more of these things or it could just be a fluke situation,” Crowetz said.

Carr obviously reported the theft to the sheriff’s office, as well as the camera issue. They are now looking into it.

Crowetz is advising people to ensure they have very strong passwords on their WIFI. He suggests setting up an alert to notify you if your WiFi goes down, and says you should also consider hardwiring your cameras instead of using the WiFi.

“If the camera can be hardwired then a lot of the vulnerability is removed” Crowetz said.